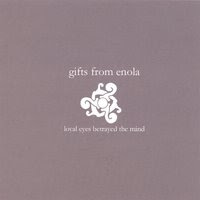 Tracklist:
01. Behind Curtains Closing
02. Early Morning Ambulance
03. City Lights Scraped The Sky
04. In The Company Of Others
05. With the Tides In Hindsight
06. Miles Of White
07. We Watched Them Lose Our Minds
08. Screaming At Anything That Moved
09. Memoranda


Gifts From Enola, a four piece from Virginia in the United States, are a really refreshing band. You can see this from their MySpace (at the time of this review they have no website). There’s no fancy layout, no flash images, no HTML, just the music and a little bit of dialogue. They’ve let their music do the talking, and what a good idea that turns out to be. It’s heavier than your average post-rock, very much metal inspired, and for Gifts From Enola, the standard quiet-loud dynamic seems to have changed into a loud-even louder dynamic. This is a good thing.
With no website to feast my journalistic eyes upon, I’m left with a very sparse MySpace to inform myself about the band. Well…a couple of them are 20, the others two are 19, something that is incredible given the music they make, and it can be safe to say that Gifts From Enola might not go down too well in Japan. The Enola Gay was the name of the plane that brought gifts to Japan in the form of atomic bombs. This might all be a mighty coincidence, but Gifts From Enola have a picture depicting something similar to this on one of their show flyers. Anyway, I’m sure the band isn’t praising this, and for the record, I like the name.
Loyal Eyes Betrayed The Mind opens with "Behind Curtains Closing," which starts with a lulling guitar before exploding into a crashing riff, not a million miles away from "Greet Death" by Explosions in the Sky, before, at 3 minutes and 23 seconds, something magical happens. Out of seemingly nowhere, this fast, heavy, and complicated guitar riff appears, changing the whole tempo and feel of song, taking it on to the next level. Gifs From Enola have certainly followed the old cliché "put your best foot forward," unleashing the best song on the album first. But the rest of the album is in no way a let down, it just highlights how strong the opening track is. "Early Morning Ambulance" follows on nicely, with heavy riffage added with a high pitched guitar, before it all comes to a crashing rhythmical finale, and sounds not dissimilar to Russian Circles. "City Lights Scraped The Sky" contains one of the best breakdowns you’re likely to hear, with two guitars duelling with each other to create a gorgeous little melody, before exploding into some more heavy riffage. "In The Company Of Others" kicks off with some jazz inspired bass line, and then becomes even more frantic with the introduction of a distortion pedal and guitar tapping solos.
One of the many great things about Loyal Eyes Betrayed The Mind is that no two tracks sound the same, and over the course of forty seven minutes you’re treated to many delights, with no song making me reach for the fast-forward button. It’s heavy in all the right places, but never too heavy, and Gifts From Enola mix moments of ambience really well, especially at the start of "Miles Of White" and "Memoranda." And when I say the album is heavy, it never ventures down the route of endless chugging riffs a la Isis and Pelican (two clear influences of the band), but instead Gifts From Enola develop intricate riffs, layered over a lead melody, to create something enjoyable each time. Gifts From Enola will fall under the umbrella of post-rock, but they are in no way confined to this genre, as they seem so adept at bringing others into the mix. There’s metal, rock, math-rock, jazz, and ambience all thrown together here, and it alludes to something quite wonderful. When the end of year polls come around, this album will feature highly in my list, and if there are any albums better than this, I can’t wait to hear them. Loyal Eyes Betrayed The Mind truly is a gift for all. -by James Ould(thesilentballet.com)