Kinski - Down Below It's Chaos 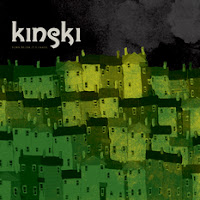 
Kinski's relentless drive to the next level -- via being louder than everything on the planet on the one hand, and on the other having a rigorous structure to their efforts that practically compels listeners -- takes an interesting turn on Down Below It's Chaos for a variety of reasons. First, having always sounded very futuristic just by being clean and hot-wired, the album is as close to a tribute to early-'70s fuzz worshipers as the quartet's yet made since its very earliest days -- Chris Martin's initial guitar invocation on "Crybaby Blowout" just needed a leather-clad greasy biker to go with it and all of a sudden it's Death Valley 1970. (Not for nothing is the album's final song called "Silent Biker Type.") The feeling is maintained throughout the album, with the help of production guru Randall Dunn, and while it's a bit surprising on first blush it's also no surprise that Kinski rock it out brilliantly, with tight stop-start moments showing their precise eye for dynamics remains key, as songs like "...Boy, Was I Mad!" and "Child Had to Catch a Train" -- which even adds in a note-perfect garagey keyboard part -- show. The second twist is actually even more surprising in context: Martin sings! On three songs his rather Thurston Moore-ish vocals take a bow, and if the comparisons to Daydream Nation-era Sonic Youth are a touch too easy to make at points, it all still sounds enjoyable enough. Meanwhile, for all the overdrive the side of Kinski that appreciates a good ambient meander has hardly disappeared either -- "Passwords & Alcohol" is a semi-shoegaze amble towards its start while the evolving flow of "Plan, Steal, Drive" makes for gently cascading zone grace, a chance to appreciate a rising sun before hitting the highway once more at full speed. -by Ned Raggett (allmusic.com)


Official site
MySpace
Buy it
Posted by MeTSam at 3:11 PM