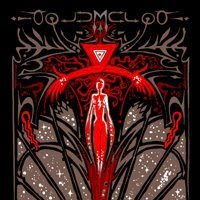 Formed in 1999, Italian avant-rockers UFOmammut are a psychedelic sludge band with influences ranging from Neurosis, Kyuss, Pink Floyd and early Sabbath. Consisting of core trio Poia (Guitars, Synths), Urlo (Bass, Vocals, Synths, Fx) and Vita (Drums), they invite Lorenzer of ‘Lent0’ and vocalist Rose Kemp to add their magic to two tracks. With an evil running time of 66minutes and 6 seconds, the Italian trio deliver 7 hard-hitting tracks which range from 5-10 minutes, the exception being the half hour monolith ‘Void/Elephantom’ which closes proceedings. The sound of UFOmammut is a unique combination of crushing post-metal fused with elements of stoner rock and space-rock. Occupying a similarly rough and unpolished aesthetic as early Isis, their sound simmers with an apocalyptic power which is inset with spacey undercurrents.
There are many metal bands doing the whole post-rock dynamic thing, attempting to stretch their downtuned riffs towards infinity and slopping ambient dronescapes into the back-ground. UFOmammut are a different proposition altogether and exude a classiness that is missing from all but the league leaders (namely Isis and Pelican). Although these aforementioned bands provide a reference point, UFOmammut take those post-metal aesthetics to new and uncharted heights, carving out a propulsive and constantly engaging soundscape. As befits their genre, they produce linear-ish sound-structures but instead of treading formulaic territories, their sound is always focused and is committed to creating the most explosive and energetic soundscapes possible through cleverly arranged arrangements and a masterful grasp of tempo manipulations. Building on the experience of their warmly-received ‘Lucifer Songs’, ‘Snailking’ and ‘Godlike Snake’ albums, they constantly raise the intensity of their sound in each track, with cyclical guitar, bass and drum clusters that crawl steadily along an alien landscape like a psychotic freight-train crunching through all that gets in its way whilst eerie fx spiral in and out of focus. Urlo’s rasping vocals appear intermittently, sounding tortured and muffled like they have been recorded in the studio’s basement. This submerged quality makes them sound like another instrument and remind one slightly of Electric Wizard’s Jus Oborn.
Refrehsingly ‘Idolum’ is not just one constantly pounding barrage of riffage and its variety allows its heavier dynamics to be accentuated and made more tangible. On ‘Ammonia’ for example the listener is greeted with spacey atmospherics and Rose Kemp’s angelic vocal murmurs which combine with the downtuned riffage and stoner-rock percussion to create a highly cinematic experience that pitches light against dark. Elsewhere, the 8 minute ‘Nero’ initiates with a particularly nasty, early Isis-esque downtuned guitar and barraging percussion cluster that meanders hypnotically over a soundscape of wafting drones and out-of-scope vocal sample snippets. The force of the guitar and percussion rise to the fore with military prowess before being joined by Urlo’s rasping vocals. The aptly named ‘Destroyer’ shifts along with crunching momentum before slipping into a spaced out ‘Tarantula Hawk-ey’ psyche-metal finale. The closer eptimises UFOmammut’s now polished spacey post-metal sound, commencing with bubbling psychedelic guitar, bass and synth excursions over which Urlo’s raw vocals are barely audible. Almost techno-like in its progression, each element starts to gather momentum until it explodes in a crunch of metal-y goodness. There is a real palpable sense of molten energy released with each motorik cluster of downtuned riffs and Lorenzo’s powerful sonic waves give the track its crushingly psychedelic identity. An extended foray into frequency-manipulating ambient drone territory acts as the lull before the storm as after several minutes, melodically oscillating space-rock melodies spark into action to indicate the gathering of storm-clouds before the crushing finale.
With ‘Idolum’, UFOmammut have carved out their most satisfying, raw-to-the-bone piece of apocalyptica yet. Thoroughly engaging, refreshingly varied and performed with real conviction, it scores a soundtrack to ones ‘twisted super-hero’ inspired dreams. (KS) (experimusic.com)