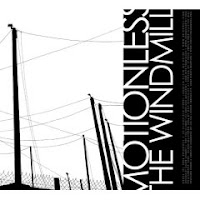 For such a young band, Motionless has seen its share of hard knocks. Since its inception in 2001, the band has cycled through several members, experimented with varied instrumentation, and morphed through a wide range of styles. In its current and most stable incarnation, Motionless is an instrumental band consisting of four core members and occasional guest instrumentation. While most easily corralled into the post rock or prog genres, Motionless (as is the case with most bands who fall under an umbrella label) don't confine themselves to any prescribed sound, and are most easily understood just by listening. Integrating a vintage Fender Rhodes electric piano, brooding guitar melodies and effects with steady consistent drumming, the band continues to discover ways to make their art new and exciting.

Motionless' debut, entitled "The Windmill" is an impressive effort. With a deceptively short tracklist (at only 4 songs), this long-player EP clocks in just shy of 40 minutes. While taking a nod from the sonic scapes of The Appleseed Cast and Explosions In The Sky, Motionless adds a new element to the sound in Jay Penman's growling fender rhodes - almost tranparent at times, but most crucial to the overall sound. As each mini epic unfolds, the band uses their time productively - to experiment an array of effects, dynamics, and moods. Don't be mistaken: even with a seemingly stripped down instrumentation, the members of Motionless are able to weave complex and chaptered narratives without speaking a word - just as effectively (and perhaps moreso) than traditional lyrical rock bands. This is the mark of a truly successful instrumental group.-by Claudia Hinz (cdbaby.com)